This article is a part of study titled “Political Communication with the Government Songs after the Coup d’état 2014.” The researcher aims to study about the main implication of the songs, and its Thai political communication since 1973. The researcher also aims to further explain how significant the messages in the songs are, and the reasons why they were used as a tool to portray political communication to the people. The article will focus on the year of 1973, Black May 1992, the political movements of the People’s Alliance for Democracy (PAD), the United Front for Democracy Against Dictatorship (UDD) and the People’s Committee for Absolute Democracy with the King as Head of State (PCAD). And including this recent era, there still are the uses of songs by the government of General Prayuth Chan-o-cha. The researcher has gathered documents and used techniques about information analysis, which are documentary research, interpretative analysis, and context analysis. The researcher has found that, in every period of time each political event since October 14 1973, Black May 1992, the political movements of PAD, UDD, PCAD, or even the era of General Prayuth’s government, songs and music have been continuously used as a message to portray characteristics and political ideology to people. Moreover, songs are not only entertaining and cherishing hearts, they are the most convenient way of communication that can deeply and immediately reach to the hearts of people. They require no violence or order. To acknowledge and listen to songs is ingenious and the softest way to do the political communication in order to create the acceptance of the political leaders, military government, and people’s leaders according to political context, which is different in each political era. The study shows that from 1973–1976 politics and society were craving for rights, freedom, and democracy. There were protests that required for constitution, using songs to convey their political thoughts from both students and intellectuals. On the contrary, there was another story that came through songs from government side as well. In 1992, some artists used songs to create the impact and mutual political understanding among themselves so they could continue to protest the government with the same purpose. Moreover, songs were used to relieve stress during the protest. In times of the political movements of UDD and PCLD they also used songs to stir up people’s emotions, both delightful and sad, to build a stronger commitment or to say bad things about the other side after the Coup d’état 2014, songs are considered as tools that government uses for explaining and providing reasons for taking over the power. They also use those songs to refer to duties that the political leaders or Coup d'etat will do or promise to do for people and society.

How to Cite
Deewarat, J., & Phujeenapan, P. (2019). The Significance of The Songs in Thai Political Communication from B.E. 2516 to Present. Political Science and Public Administration Journal, 10(1), 1-32. Retrieved from https://so05.tci-thaijo.org/index.php/polscicmujournal/article/view/129656
Issue
Vol. 10 No. 1 (2019): January-June
Section
Research Article 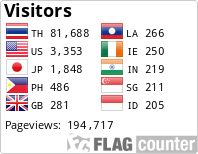