The aims of this research are 1) to study current situations and problems, and 2) to study development models of cultural learning resources by suitable community participation to local. This was the Research and Development (R&D), which adapted the Action Learning (AL) and Participatory Action Research (PAR). Research was separated into three periods, which were the first phase was document study, related research, and defined research framework, the second phase was selection of village target, and the third phase was creation of the model’s cultural resource learning development by the tentative conceptual model, after that brought to test with research target area. Research instruments for collecting data were observation, interview, focus group discussion, Before Action Review (BAR), After Action Review (AAR), workshop, and activity report. Research areas were: Bann Dongyang village Moo 3, and Bann Namuang village Moo 14, Nakha sub-district, Wapipathum district, Maha Sarakham province. Purposive sampling method was used for sampling collecting, which was 70 people, so that number were included 20 people of key informants, 30 people of casual informants, and 20 people of general informants. Researching duration started from September 2012 to September 2014. Document analysis, there studied from involving document and field studied, and using the analytic induction method. The research result found as the following: 1. Current problem issues were found that the research sites have got a temples being as a community center, beliefs were inherited from their ancestors, and important culture that related to Buddhism. There are events all the year, which call “Heat Sipsong Kong Sipsee”. In addition, there were five groups, which involved with the development of cultural learning resource. Those were Bann Dongyang village such as a group of reed mat weaving, and a group of agricultural professionals, also Bann Namuang village such as a silk weaving group, a basket - weaving group, and a group of agricultural professionals. However, they did not concomitant uses the development models of cultural learning resource with their developing. 2. The development models of cultural learning resource by community participation, so that created the development model by used a tentative conceptual model, also applied five processes of Action Leaning (AL), and six processes of Participatory Action Research (PAR). From those two approaches could create fourteen events of action learning activities, after that experimentation with the research areas. As a result of those activities, it were found a new groups that from: a cotton - weaving group was established one more group from an original target group at Bann Namuang village. Furthermore, fourteen of practical learning activities are increases to seventeen activities, which were a budget seeking activity and supporting sector, activity of making a knowledge brochures, and creating a network of cultural activities. In conclusion, development models of cultural learning resource need to rely on learning process, which from action learning and community participation for doing activities, so that consistent with wisdom, lifestyle, and public needs of people in that area. In order to changing an actual condition area that appropriately appropriateness to bring the country’s development, which are equilibrium, consistency, and further sustainability. 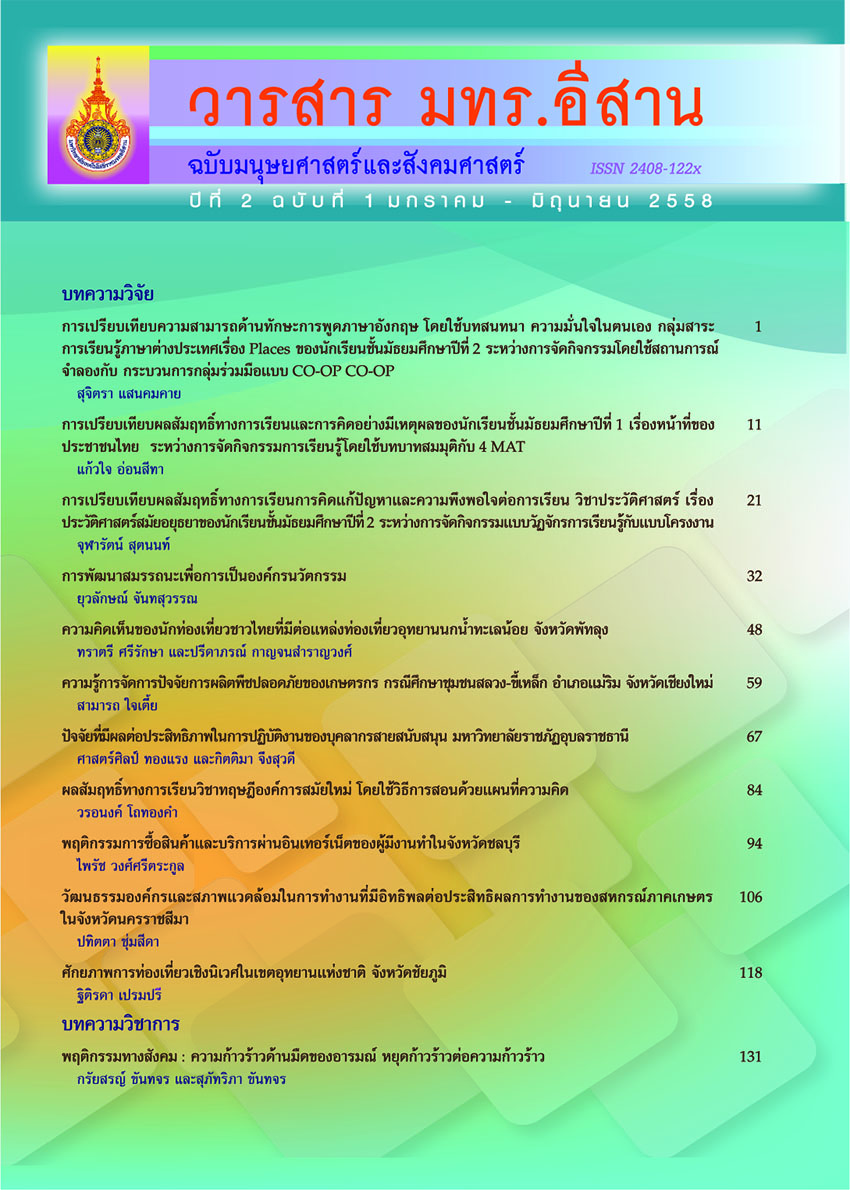