Findings are as follows:

1. Language and dress The original Phu Thai Ranu Nakhon (1970-1974) is a family of Tai - Kadai language. Is a sub-group of Tai Dam language Most of them are in the upper northeast province. Man wearing sesame seed cloth, black eyes wearing local clothes. Black hair bun Woman wearing a skirt And wearing a shirt cut in black local cloth.

2. Language and dress, Phu Thai Ranu Nakhon is currently (1975 - present). Match the need to use words that suit the person’s position and timing, while the female dress wears the Indigo cylinder sleeve shirt and the red shirt. Silver buttons with a pair of belts wrapped in red cloth. Current Phu Thai Ranu Nakhon (1975 - Present).

3. Causal process of changing language and dressing Phu Thai Ranu Nakhon (1970 - present) Outside is caused by the influx of culture, society, economy, politics, history and various media. The inside is caused by the Phu Thai people wanting to change the language in the community of Phu Thai people. There are characteristics of pronunciation, vocabulary, forms and other characteristics that change with time, caused by people who use language to respond to social, economic, and political conditions.

Treeaekanukul, L. (2006). Adaptation to Thai culture and the effects of restrictions on rights on the quality of life of Tai Yai without Thai nationality in Chiang Rai Province. Doctoral dissertation of sociology, Ramkhamhaeng University. [In Thai] 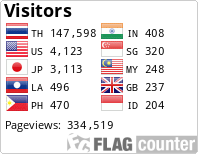