Theoretical Concept and the Phenomena as the Causes of Poverty: A Case Study of the Peasants in Kalasin Province

There are many theoretical concepts of poverty both its definition and causes. In this paper, family poverty is the condition that a family cannot earn enough income for their expenditures. The causes of poverty are from different views: internal causes in an individual e.g. laziness, social causes e.g. low level of education, economic causes e.g. unemployment, political causes e.g. prejudice and inequality, and others such as civil war, and natural disaster. The author has never denied such various concepts but accepts that internal causes are necessary conditions while other causes are additional conditions to make people become poor. To discover the main factors and the unavoidable conditions causing Thai people living in a state of poverty, the current study aimed to focus on the people living in relative poverty in the poverty zone of Thailand i.e. the peasants in Kalasin province. The data included the information of the peasants in the province and the interviews. Probit Model was adopted for data analysis.

The study revealed the internal causes of poverty in an individual which were oldness and permanent sickness, voluntary unemployment, investment losses, and having a single career as peasants. Their poverty was caused by their own behaviors. 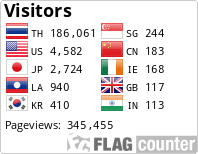